HomeWho We AreOur History
A- A A+

In 1973, Philadelphia Eagles football player Fred Hill and his wife, Fran, learned that their daughter, Kim, had leukemia. While traveling into Philadelphia for treatment at the children’s hospital, they met other families in the same situation. These families drove hours to the hospital to be with their children, only to sleep overnight in waiting room chairs and to eat from vending machines because they had nowhere else to go.

Fred Hill and his football team decided to do something for these families… build them a “home-away-from-home” in Philadelphia. The Philadelphia Eagles teamed up with local McDonald’s Owner/Operators to raise money, purchase and restore a house near the hospital where these families could stay. By October of 1974, the first Ronald McDonald House was born. Since that time, more than 350 Houses have been built worldwide. 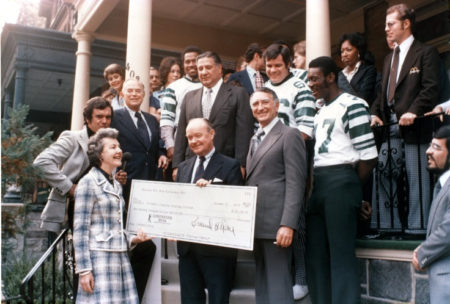 Check Presentation on the steps of the first Ronald McDonald House

The first Ronald McDonald House in St. Louis opened in July of 1981 with seed money from local McDonald’s Owner/Operators and support from corporations, organizations, individuals and foundations. The original House on West Pine Blvd. underwent two expansions over the years, increasing the number of bedrooms to 20. In April of 1996, a second House on Park Avenue was opened, and in 2003, eight apartments were made available for long-term stays. Then, in 2010, a third Ronald McDonald House, and the 300th in the world was built to serve West County hospitals. Together, these facilities can provide lodging to 59 families each night.

Since we first opened our doors in 1981, more than 40,000 families have found comfort, care and a home-away-from-home at the St. Louis-area Ronald McDonald Houses.