HomeMeet Roger and Janet Thomas
A- A A+

Janet and Roger Thomas at an event to represent RMHC St. Louis

For almost a decade, Roger and Janet Thomas have helped guest families at Ronald McDonald House Charities of St. Louis. After retiring in 2009, Roger found himself staying busy with a job at La-Z-Boy furniture, an RMHC National Donor who supports their team to volunteer at local Ronald McDonald Houses.

“At that time, we were fixing dinners for one of the [St. Louis] houses. My manager asked if I would like to go and cook, I said yes and asked if my wife wanted to come along.  That night we were both hooked on RMHC,” says Roger.

As many Meals from the Heart volunteers know, having the opportunity to provide dinner for guest families is one of the most impactful ways to give back. Before the pandemic, the unique experience welcomed community members inside the Ronald McDonald Houses, prepare a home-style meal in the large industry-sized kitchen, and spend time with guest families.

“After cooking we cleaned up and sat down to talk with some of the families. My wife and I got caught up in what RMHC was doing for families of sick children,” says Roger. “We have been supporters ever since.” 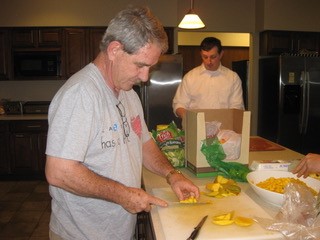 Once a month wasn’t enough for these go-getters. Roger and Janet wanted to get more involved and started thinking out-of-the-box to support RMHC. 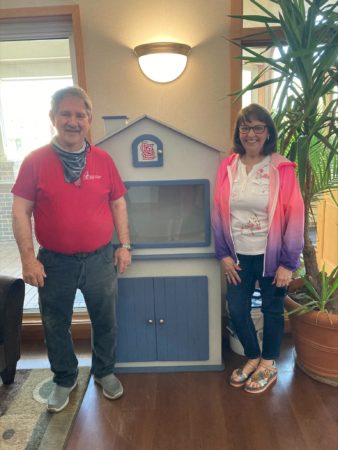 We are so grateful for Roger and Janet’s time and expertise to provide fun ways to support our Tab Top Program. Both Tap Top houses that Roger built have been featured in countless drop-off photos from supporters and returning families. They are also a highlight during in-house tours, many visitors marvel at the size and quality of the structures.

Throughout the years of volunteering at RMHC St. Louis Roger and Janet have become what we call, “Friends of the House,” – individuals who showcase they truly care for the mission and the families we serve.

“We have connected with so many families at the houses and they have shared their lives with my wife and me. We have so many wonderful memories of the people we have met throughout the years. It’s just amazing,” says Roger.