HomeMeet the Worthen Family
A- A A+

The Worthen Family called RMHC St. Louis “home” while their son Jase spent the first year of his life in the hospital. 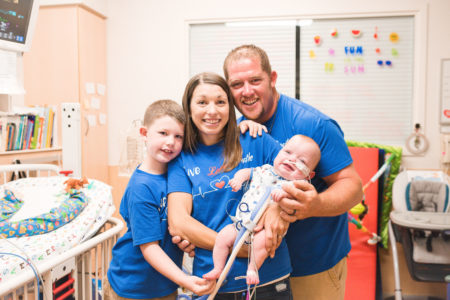 On December 5, 2017, Jase Worthen was born nearly three months early. For the whole year that followed, the Neonatal Intensive Care Unit (NICU) at St. Louis Children’s Hospital was his home-away-from-home. All the while, Jase’s mother, Jamie, called the Ronald McDonald House on Park Avenue in St. Louis “home.”

Thanks to the Ronald McDonald House, Jase was never alone. Rather than being two hours away in her hometown of Murphysboro, Illinois, Jamie was just minutes away. She could spend her days by Jase’s side, and her husband, Sam, and older son, Aiden, could visit on the weekends for much-needed time together as a family.

It was incredibly difficult to be away from home for so long, but, according to Jamie, RMHC helped ease some of the burden.

“We left our hearts at the hospital every night,” says Jamie, “but having a room at the Ronald McDonald House ensured that I got the self-care I needed, so I could be strong for Jase.”

In January 2019, Jase graduated from the NICU and left the hospital for the first time ever! After 420 days in St. Louis (including the time she spent here for medical care before Jase was even born), Jamie was finally able to take her baby boy home. And although he still requires a ventilator to breathe, along with other special equipment, he is thoroughly enjoying life in Murphysboro with his family by his side.

“He is the happiest baby,” says Jamie. “It means everything to me to have my family together, under one roof.”