HomeMeet the Voigt Family
A- A A+

Paying it Forward: Connor’s Cause provides the comforts of home to families inside the Ronald McDonald Family Room 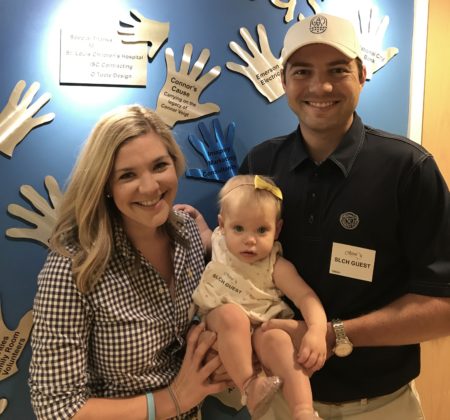 Whitney and Neil Voigt’s son Connor was born on April 28, 2015. During the first few weeks of his life, Connor endured multiple surgeries and procedures at Mercy Hospital in St. Louis, where he stayed in the neonatal intensive care unit (NICU) for nearly a month. During that time, Whitney and Neil found comfort in the Ronald McDonald Family Room.

“Once he was comfortable and resting, Neil and I were able to find a bit of an escape at the Family Room in Mercy Hospital,” says Whitney. “We typically made afternoon trips for a cup of coffee.”

Despite Connor’s complex medical issues, the Voigt family was determined to live their lives as normally as possible, so they went on a family vacation to Florida about six weeks after Connor’s NICU stay. They had a wonderful week full of memories, but on the drive home, Connor became ill and they had to rush him to the ER. What ended up being a severe infection kept them at Vanderbilt Children’s Hospital in Nashville, Tennessee, for two weeks.

“Being away from home with a very sick child was beyond scary and difficult to handle, but we were immediately comforted with the Family Room that was located right outside of the PICU doors,” says Whitney. “We could not have survived that week without that room – purely as the comfort that we knew from home.”

After returning home, the Voigts had one additional unexpected hospital stay at St. Louis Children’s Hospital and, again, found comfort in the Family Room.

“While the Family Room most certainly gave us an escape – to simply grab a snack or walk around – it also became our good luck spot,” says Whitney. “When Connor would have surgery or a procedure, we would leave the hospital room and come to the Family Room to wait and pray. It was our safe place.”

In 2016, Whitney and Neil established Connor’s Cause in memory of their sweet baby, whose powerful legacy helps other little warriors through their fights with tragic diagnoses. Connor’s Cause generously supports families and local charitable organizations by donating meals or purchasing special needs equipment.

“There is no better program than RMHC to directly impact those families that are dealing with the unexpected and the unimaginable, and we hope that it continues to be a safe place for families during these difficult times,” says Whitney.

Connor’s Cause supports Ronald McDonald House Charities of St. Louis and the Family Room program both financially and through volunteerism. On several occasions, Whitney and Neil have purchased and delivered hot meals to the Family Rooms to “pay it forward” for their time spent at Vanderbilt Children’s Hospital.

“After eating out every day for a week (and paying for it), to have a warm, delicious meal that was not hospital food was simply amazing,” Whitney recalls. “I will never forget feeling such surprise and delight for something so simple.”

And we know that the families who rely on our Family Rooms feel the same way about the thoughtful, delicious donations that Connor’s Cause provides. We are so grateful to this wonderful family and generous organization for their support.