HomeMeet the Vaughn Family
A- A A+ 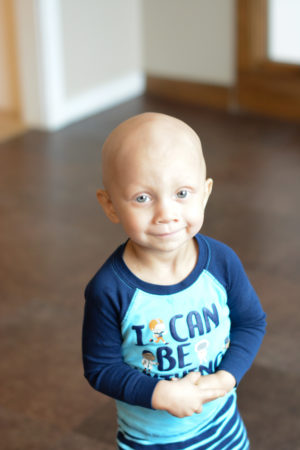 Megan and Amos Vaughn heard the devastating news that their 13-month-old daughter, Marilyn, had a brain and spine tumor on July 14, 2016. Three days later, the Vaughns traveled 312 miles from their hometown of Danville, Illinois, to seek treatment at St. Louis Children’s Hospital for Marilyn, who had been diagnosed with Atypical Teratoid Rhabdoid Tumors (ATRT). Soon after, Megan and Amos, along with their 4 children: Solara, Selene, Marilyn and AJ, moved into the West Pine Ronald McDonald House.

At the time of Marilyn’s diagnosis, the Vaughns’ youngest child, AJ, had just been born. Soon after, Amos received a blood test confirming he was a carrier for the genetic abnormality of ATRT, meaning AJ was susceptible as well. So, as Marilyn began her chemotherapy treatments, AJ began receiving a screening MRI every three months.

In August of 2017, the Vaughn family experienced a rollercoaster of emotions when an MRI showed AJ had developed two brain tumors within the same week that Marilyn was declared cancer-free. When Marilyn ended her chemotherapy treatments, AJ began his.

Over the course of the next seven months, AJ underwent chemotherapy, surgery to remove a tumor, and three bone marrow transplants, meaning lots of time spent at the hospital. During his treatments and time spent recovering from surgery, the Vaughns used the Ronald McDonald Family Room at St. Louis Children’s Hospital.

“I find it really comforting,” says Megan, noting that she especially appreciated how AJ’s siblings could have a comfortable space to gather while they were at the hospital.

“I have a family motto of ‘No man left behind,’ and living here meant that we all got to be together,” says Megan, adding that she has no idea what her family would have done without the Ronald McDonald House. 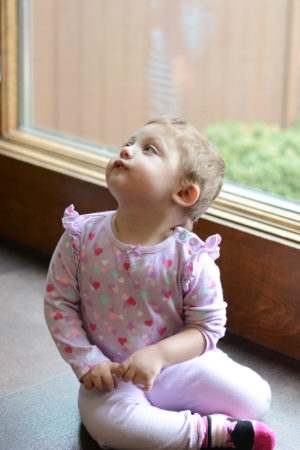 Not only were the Vaughns able to keep their family close, they also sent their oldest girls to school and made new friends, which restored a sense of normalcy to their lives. They were even able to take their two oldest girls to a Katy Perry concert thanks to the generosity of an RMHC donor, which Megan says is one of her favorite memories from their time spent at the House.
In addition, Megan attributes much of the comfort and care they received to the RMHC team.

“I love the staff here; they’re just amazing. They became family to me,” she says.

We are thrilled to report that in March, after 600 days at the Ronald McDonald House, the Vaughns have checked-out because both Marilyn and AJ are cancer-free! With healthy kids in tow, this family’s future looks bright as they embark upon a move to Oklahoma, where a fellow RMHC guest family with whom they became close friends resides.

“It’s really awesome. I met friends here at this House who is going to help us get settled there,” says Megan, of her family’s next steps.

Here at RMHC St. Louis, we miss the Vaughn family dearly but wish them all the best on their new adventure!