HomeMeet the Smith Family
A- A A+ 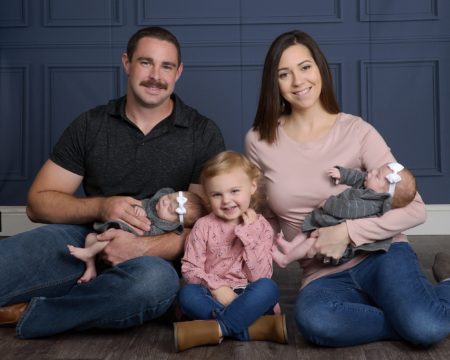 The Ronald McDonald Family Room kept a Wentzville family close when it mattered most.

When Megan Smith checked into Progress West Hospital – where she normally spends her days as a nurse rather than a patient – for a scheduled C-section on August 2, 2019, she never dreamed of the journey that lay ahead.

However, just minutes after her twin daughters Nora and Josephine were born, Megan and her husband, Josh, heard the frightening words: “We need to call Children’s right away.” And at that moment, their world turned upside-down.

While doctors tried to stabilize Megan’s blood pressure, the babies were taken straight to the neonatal intensive care unit (NICU). Nora had been born with a digestive tract abnormality that required surgery, and Josephine was in respiratory distress. Almost immediately, a transport team took Nora to St. Louis Children’s Hospital via ambulance, and Megan’s husband, Josh, followed.

With Josh and Nora at a hospital across town, Megan was determined to see Josephine. She made her way to the NICU floor of Progress West, where the nurses agreed to let Megan hold her hand and stroke her face for just a moment, and something miraculous happened.

“They were preparing to intubate her,” recalls Megan. “I just remember feeling so overwhelmed and praying that God would let her oxygen stabilize as I spoke to her and touched her. From there, she continued to improve, and over the next few days was off of oxygen support altogether and able to stay by my side.” 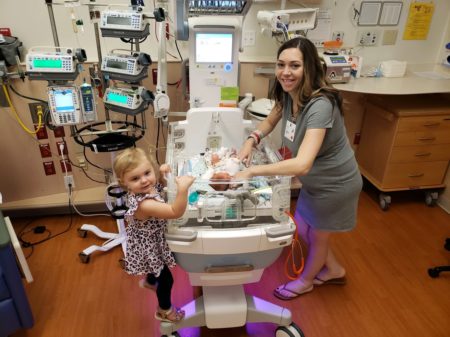 Meanwhile, during the first few days after the girls were born, Josh spent every waking minute with Nora at St. Louis Children’s Hospital – more than an hour away from their home in Wentzville, Missouri. Megan and Josephine were at Progress West, and their 3-year-old daughter, Sophia, stayed with her grandparents.

On Nora’s sixth day of life, she underwent primary repair surgery and received a temporary colostomy. All the while, Josh had not left her side, other than a few short trips down the hall to the Ronald McDonald Family Room.

“Josh is a detective, so he is used to not sleeping, but he’s not used to the stress of your child being sick and needing surgery,” says Megan. “The Ronald McDonald Family Room volunteers helped with everything: towels to take a shower, a hot cup of coffee, and snacks. They made it feel like home.”

As soon as she was able, Megan joined Josh to be near Nora. In fact, she was able to hold Nora for the first time before they wheeled her back for surgery. As a nurse herself, Megan knew the importance of family-centered care. The Ronald McDonald Family Room made it possible for both of them to be advocates for Nora 24/7.

“The Family Room was a lifesaver, to say the least,” says Megan. “It helped our family in a big way.”

After five weeks, Nora returned home and was reunited with her twin sister, Josephine, who had spent three weeks in the NICU at Progress West. Three months later, just before Thanksgiving, Nora’s colostomy was successfully reversed. Now, the girls are happy, healthy, growing babies, with a tiny scar on Nora’s belly serving as a reminder of all they have overcome.

Over the holidays, the Smiths asked family and friends to donate Wish List items to the Ronald McDonald Family Room in honor of Nora – and the display of gratitude was amazing! Megan and Josh delivered two carloads of household essentials and snacks to St. Louis Children’s Hospital for other families seeking comfort and care through our Family Room Program, and we could not be more grateful for their support.

“From our family to all who donate and volunteer with RMHC, thank you,” says Megan and Josh. “Because of you, families like ours are able to focus on what really matters: our children’s health and happiness. God bless.”