HomeMeet the Palmer Family
A- A A+

Baby Jack Made History while his family found a home-away-from-home at the Ronald McDonald House on West Pine Boulevard. 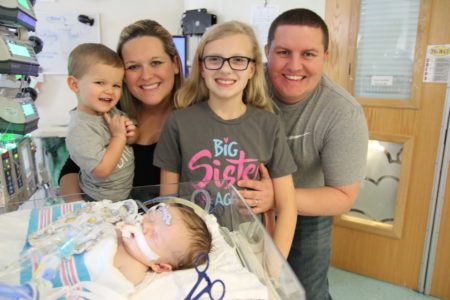 Tiffany and Chuck Palmer learned heartbreaking news during a 20-week routine ultrasound. Their son Jack was diagnosed in-utero with a rare congenital heart defect called hypoplastic left heart syndrome (HLHS). The doctor explained that many babies with this diagnosis do not survive to birth, and even fewer do outside the womb. Ultimately, his only chance of survival would be a heart and double lung transplant.

The Palmers traveled from their hometown of Kansas City, Missouri, to St. Louis for treatment at St. Louis Children’s Hospital, where Baby Jack was born on January 16, 2018.  Two months later, he was listed for a heart-lung transplant. During that time, the Palmers found a home-away-from-home in one of our long-term apartments on West Pine Boulevard.

Three months later, on May 23, Jack underwent an 11-hour lifesaving surgery, making him the youngest patient in more than a decade to undergo a successful heart-lung transplant in the United States.

However, the Palmers still had a long way to go before they could head home. While Jack was recovering in the hospital, his family found comfort in staying close.

“Being displaced from home for so long was definitely not easy, but knowing we had a nice, quiet and clean apartment to go to was comforting,” says Tiffany. “Financially, we could not have afforded our own hotel or apartment in St. Louis while paying our mortgage in Kansas City.”

The Ronald McDonald House apartment also offered a place to spend time with their older children, Allison and Maximus, and Jack’s grandmother, Karen.

“My son Max loved the playground. Playing outside with him was something ‘normal’ we could do during a really stressful time in our lives,” says Tiffany.

She also credits the Ronald McDonald Family Room inside St. Louis Children’s Hospital for being a place of respite from the at-times overwhelming atmosphere of Jack’s hospital room.

In August, Jack was discharged from the hospital, and the Palmers headed home soon after. This momentous milestone ignited interest from the public, and the family was featured in headlines across Missouri and beyond.

Now, nearly one-year post-surgery, Jack is a thriving, happy baby. He celebrated his first birthday at home with a live video on his Facebook page with over 4,000 followers. The Palmers use their online community to raise awareness about congenital heart disease and share updates about Jack with friends and family.

And even though he is four hours from the hospital, Jack is in excellent hands with Tiffany, a neonatal intensive care unit nurse, and Chuck, a LifeFlight Eagle emergency medical technician base manager. The Palmers’ next trip to St. Louis for a doctor’s appointment is scheduled for late spring 2019, and if they need a place to stay, they know that RMHC will be here for them.

“The Ronald McDonald House was a lifesaver in more ways than one,” says Tiffany, thinking back on the rollercoaster of events and emotions she has experienced. “It gave us a place to call home, and we will forever be grateful for that.”