HomeMeet the Flynn Family
A- A A+ 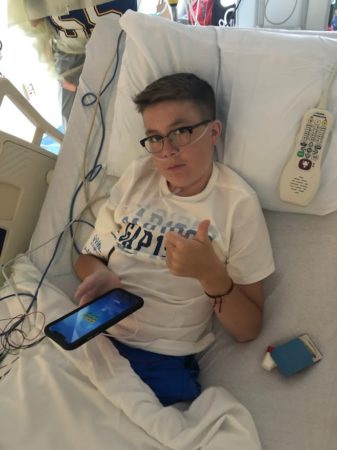 In 2005, when he was an infant, Will Flynn was diagnosed with Cystic Fibrosis, a hereditary disease that affects the lungs and digestive system and the same disease his older sister, Anna, had been fighting for nearly four years. Over the next decade, the Flynn Family sought care in medical centers across the country, including the University of Iowa, the University of Michigan and Colorado Children’s Hospital.

In 2016, 11-year-old Will was transferred back to his home in Peoria, Illinois, after a culture test found an infection called nontuberculous mycobacteria (NTM) in his lungs. Will was treated over the course of the next 18 months for NTM, but when he did not show signs of improvement, his team of medical experts determined a transplant would be the only option to move forward.

In the spring of 2019, Will was accepted into the St. Louis Children’s Hospital transplant program. In April, Jim and Will traveled to St. Louis to stay at Ronald McDonald House on West Pine and by May 17, Will was officially listed for his double-lung transplant.

While waiting for the much-anticipated call, Jim and Will found refuge in one of our RMHC long-term apartments on West Pine Boulevard – truly making it a space of their own.

“Before coming here we had a paint night where each family member painted something for Will to remind him of them,” says Jim, showing off the scattered paintings propped on every free edge of the entryway and living room space inside their temporary home. Jim and Will also brought a pair of chairs with them to sit out on the front porch area and enjoy the outdoors together.

On June 7, after a month of waiting, Jim received the call and within hours Will underwent the 11-hour life-saving surgery. This was just the beginning of a new chapter before the Flynn family could head back to Illinois. While Will started his mandatory 90-day recovery, the apartment offered a place for his father and extended family to stay.

“Throughout the course of time, my daughters and Will’s stepmom have been back and forth. Most of my nieces and nephews have also been here one time or another, as well as my siblings,” says Jim, recounting the list of family members that made the trip numerous times during their stay.

One visit that Jim and Will fondly recall is the weekend before the transplant surgery. The whole family came for a surprise stay. While Will went to the store with his cousins, the rest of his family snuck into the apartment.

“They were all hiding in the kitchen as Will walked in,” says Jim. “We made a day of it and just enjoyed being together.”

During his recovery, Will actively explored everything St. Louis had to offer. The father and son duo found themselves swimming, biking, kayaking, swinging golf clubs and even running the 2019 I love Forest Park 5K in August – taking full advantage of the fresh air.

In September, after 137 days in St. Louis, the Flynn family packed up their paintings and headed home. They were happy to be reunited with their dog, friends and loving family.

“It is so important for people to know how much of an impact it [Ronald McDonald House] has on families,” says Jim as he recalls his journey with Will. “No way could I ever do this alone.”