HomeMeet John Hofman
A- A A+

Dan Harbaugh was speaking to John C. Hill at the West County Ballwin Kiwanis (where Mr. Harbaugh was accepting a donation for the Ronald McDonald House Charities) when Dan mentioned that he was considering starting a meal program where families or organizations would provide a daily dinner for residents of the house.  John C. Hill quickly volunteered to organize a group of friends to provide meals once a month.  Now 26 years later, this simple exchange has grown to multi-generations of families who still deliver meals to the Ronald McDonald House (RMH).  It all started with these two men: one with an idea and one who didn’t hesitate to volunteer to help. Here is the story.

John C. Hill and friends started providing meals once a month to the RHM Park Avenue House. Massa’s Italian Restaurant, John and Bonnie Hill, John and Mary Hofman, and Jim and Barb McElroy took turns delivering a meal every second Wednesday. This small group enjoyed bringing the meals, meeting the people helped by RMH, and sharing stories over dinner together.

In the late ‘90s, John Hofman was scheduled to deliver the December meal, when the Christmas spirit hit him.  He always enjoyed the holiday season and thought it would be great to spread this joy to families who were staying at the house.  Hofman asked Hill to play Santa Claus for the kids and he jumped at the opportunity.  They solicited and donated gifts to the delighted RMH families.  The event began to grow and flourish.  Soon they were handing out so many gifts that Jacquie and Bill Brinkmeyer were recruited to handle that aspect of the event.

When the new RMH House opened in 2010 on the Mercy Hospital campus, John C. Hill and Friends began delivering meals to this new location. John and Bonnie Hill and Bill Massa were honored to host the first meal at the new House. The beautiful RMH House at Mercy became an ideal location to transform ‘Dinner with Santa’ to ‘Brunch with Santa’ on Christmas Eve Morning.

The residents of all three RMH locations are now invited to attend a delicious brunch, entertainment by a magician, carolers, and a photo with Santa Claus (still played by John C. Hill, of course!). With the additional attendees, more help was needed and the Hofman family solicited help from the Harbaugh, Keeven, and Valenti families to prepare and serve the meal.  Early in the morning on Christmas Eve the families brought needed help, smiles, and dueling omelet stations manned by the families’ sons competing over the best omelet-flipping technique. The Brinkmeyer and Hill families still wrap and distribute all of the gifts for the kids at the brunch, with the help of Ray and Joyce Ward and Bill and Lou McAliney. 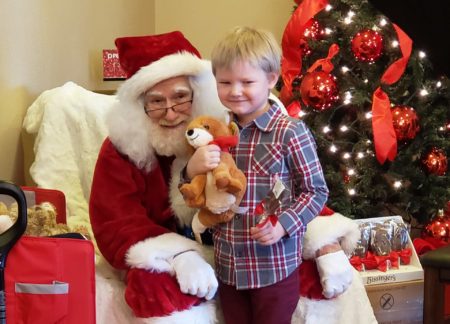 Over the past 26 years, it is estimated that the group has served over 15,000 dinners to families staying at RMH.  The group has also grown from just one man – to four couples – to six families – to their adult children, spouses, and grandchildren – and well beyond!  It has become a cherished family tradition among the Hill, Hofman, Brinkmeyer, Harbaugh, Valenti, and Keeven families. 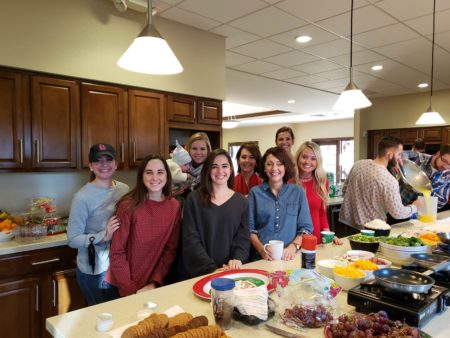 In 2020 when the Family Meal Program was suspended due to COVID-19, the group was saddened that Brunch with Santa would have to be canceled.  They wanted to continue to provide meals so they called Dan Harbaugh and begged him to let them prepare and drop off meals at each of the RMHs for the “10 Days of Christmas” (December 21-December 31) so the residents would still feel the Christmas Spirit and enjoy a home-cooked meal.  During those 10 days alone, the group delivered over 300 meals.  The group has thoroughly enjoyed participating in Brunch with Santa through the years and is hopeful that it will resume in 2021.