HomeMeet the Garriott Family
A- A A+

A long-term apartment at the Ronald McDonald House on West Pine Blvd. kept baby Emmett close to his mom when it mattered most. 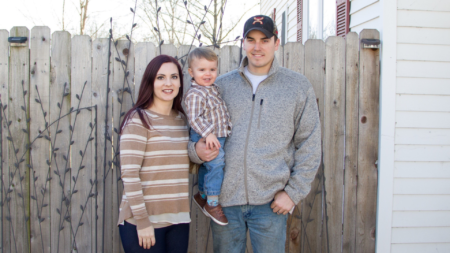 Meghan and Cole Garriott welcomed their first son, Emmett, into the world on August 30, 2015, in their hometown of Bethany, Illinois. Just nine days later, they received heartbreaking news: a routine newborn screening test showed that Emmett had a rare genetic disorder called severe combined immunodeficiency (SCID), meaning he was born without an immune system.

Right away, Emmett was transferred to St. Louis Children’s Hospital. Before he was three weeks old, Emmett received a lifesaving bone marrow transplant. His mother, Meghan, was his donor. 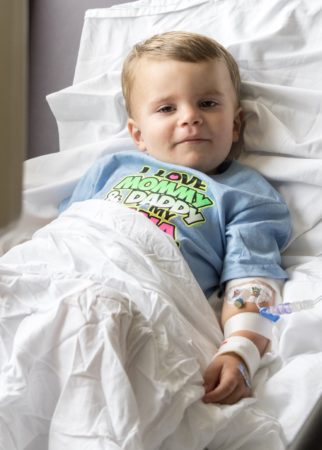 For the next three months, Meghan and Emmett called one of the long-term apartments at our West Pine Ronald McDonald House “home.” Cole stayed in Bethany during the week for work but would travel to St. Louis for weekend visits, as would Emmett’s grandparents from time to time. The apartment, designed with families of immune-suppressed children in mind, offered a place where Meghan could prepare meals, get plenty of rest and make sure Emmett was protected from outside germs as he recovered from transplant surgery.

Since returning home in December 2015, Emmett has endured additional ER visits and hospital stays, as well as countless transfusions and infusions, but despite it all, he is a happy, energetic toddler. He and Meghan still make the occasional trip to St. Louis for doctor’s appointments, which usually include a stop, tab tops in tow, at the Ronald McDonald House on West Pine – somewhere that will always hold a special place in Meghan’s heart.

“It was his first home,” says Meghan of why RMHC still means so much. “We were here for his first three months. Even though it wasn’t the best of circumstances, I was so glad it gave us that time with him.”