HomeBoard of Directors – Dr. Joseph Kahn
A- A A+ 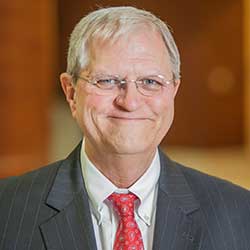 Joe Kahn, M.D., has been serving as President of Mercy Kids, a division of the
Mercy Health Ministry since 2012. From 1980 through 2012, Joe practiced
primary care Pediatrics, initially in Sikeston, MO and then in Mercy Practices
in St. Charles and St. Louis County. Prior to 2012, Joe also served as Chair of
the Department of Pediatrics at Mercy Children’s Hospital St. Louis, during the
time when both the new Children’s Hospital Tower and the West County Ronald
McDonald House were built.
Joe was raised in South St. Louis and is a graduate of Saint Louis University
and the University of Missouri School of Medicine. He has been married to his
wife Karen for over 42 years and is the proud father of two kids and the proud
grandfather of five grandkids. Joe considers himself blessed that all of his family
lives in St. Louis so he can be an active grandpa.