HomeMeet Bob Manges
A- A A+ 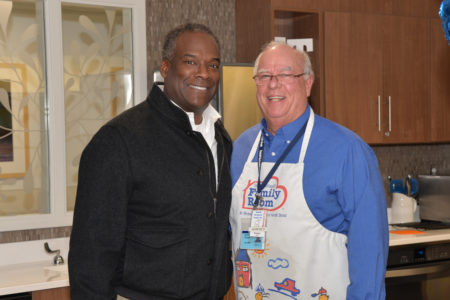 Jimmy Williams and Bob Manges at the opening of the third-floor Family Room inside St. Louis Children’s Hospital

It always surprises me how the Ronald McDonald house has grown in forty years. It started in July 1981 with eight bedrooms on West Pine and has grown to three beautiful Ronald McDonald Houses that can provide a home-away-from-home for up to fifty-nine families with critically ill children in our area hospitals. When we opened, we charged five dollars a night for a room.  But we never turned away a family for an inability to pay. Being involved since the beginning, we have a unique perspective on its development that we can share.  When the house opened, it had one staff member. Today it has twenty-eight.  The board of Directors was composed mostly of members from the Children’s Hospital cancer support parent group (Cure-Children’s United Research Effort) and the cancer support group from Cardinal Glennon Hospital (Candle Lighters), and a group of McDonald owner-operators.  We had approximately thirty volunteers in 1981 because most people had never heard of the Ronald McDonald Houses. Today we have over five hundred volunteers.

One of our first volunteer appreciation dinners was held in a small room at Busch Stadium.  Today the staff looks for venues that can accommodate over five hundred.  In the beginning, the volunteers would man (or woman) the house for the weekends when the staff went home.  My wife, Clarice, and I would volunteer from Friday night after I got off work until Sunday night about once a month until Ronald’s national office felt that a paid staff member should be available for liability purposes.

Always looking to make the house more like a home away from home, one of the volunteers ( a catholic nun) started organizing a dinner program that provided a hot meal for families returning to the house from the hospitals.  Today this program is still providing dinners and some breakfasts for all three houses.

As much as all this helped families out of town, the board decided that the families at the hospitals also needed help.  This created the family rooms in the hospitals (one at Mercy, one at Glennon, and two at Children’s). These rooms provide snacks, coffee, soda, and a place to sit and relax while still in the hospital near their children.  They also offer showers and laundry services.

All of this growth was partially funded by the generous support of McDonald’s and local businesses.  Additional funding was provided by highly successful events like golf tournaments and Kids and Clays.

When the house first opened, no one knew what the Ronald McDonald House was, and we would get several calls on the weekend inquiring if they could talk to Ronald.  Sorry, but Ronald doesn’t live here – I’ll tell him you called.

In January 1982, we went to the house as normal for the weekend in a rainstorm during our weekend duty.  Sometime during the night, I woke up with loud thunder, and as I looked out the window, I saw it was snowing big flakes.  We had twenty-three inches of the white stuff on the ground in the morning, and the city was paralyzed.  We had a young mother with twins staying at the house with one of the babies, and the other one was at the hospital.  The one at the hospital wasn’t tolerating formula and would only have breast milk.  I woke up the men in the house and they shoveled out my old car and pushed it into the street.  We got the mom and the baby into the car, and I started for the hospital, realizing that I would get stuck if I stopped.  People were cross-country skiing down the middle of West Pine, so I honked my horn, and they jumped out of the way.  We made it safe and sound to the hospital, and by then, the staff realized that the second shift was not going to come in because of the snow, so they made room for the mom and her baby.

In the early years, small fundraisers were difficult because people didn’t understand what the charity did for families.  I remember standing outside Busch Stadium in our Halloween costumes, dressed as Superman and Clarice dressed as Wonder Woman asking for donations.  We sold roasted corn on the cob (dipped in butter) at Crestwood Mall for contributions.  Before the house opened, volunteers painted and wallpapered every room and hall in the house.  Gordan Alquest was the architect, and he worked with Jack Brandt, the interior decorator, to select paint colors and wallpaper patterns.  One weekend I went to the front door, and Jack Brandt introduced himself and a protégé that he wanted to see the finished decorations.  One of the playrooms was decorated with bunny wallpaper, and the ears and tails were trimmed off in the process of trimming the wallpaper. Jack used his talent to make the bunnies whole again by dipping into his briefcase and using a marker to draw ears and tails back.  During the painting, someone bumped a ladder into the stained glass in the front door, and it shattered.  Someone from the neighborhood saw what happened and offered to make a new one.  He replaced the broken glass with a rendering of a family that is still in place today.  If you stand in front of the door and look, the faces of the people are mirrors. You understand that you could be one of the people being helped as your face is reflected in the mirror.  One week Thirty-three years ago, right before Thanksgiving, the manager called us and said that since we had the weekend, would we come in on Thursday (Thanksgiving) and cook for the families.  That started a family tradition that has lasted thirty-three years.  This year because of Covid, we couldn’t cook in the house, so we worked with our long-time support team of Jewish Women’s International and provided eighty turkey dinners to all the houses cooked by Dierberg’s.

During the forty years, the charity has been in St. Louis, the mission’s success was achieved with the high quality and dedication of the staff, board members, and of course, the volunteers. So here is to another forty years and more.