HomeBoard of Directors – April Lopinot
A- A A+ 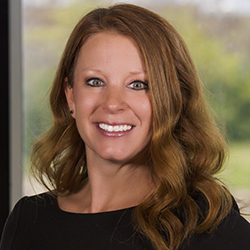 April Lopinot, Vice President of Human Resources at Keeley Companies, leads a six-person HR and Recruiting team for holding company Keeley Companies, Keeley Construction, Keeley Properties, and Keeley Restoration. April also proudly serves over 1,500 team members as the leader of Keeley Companies’ health and wellness program, KeeleyLife. April knew from the start that she had a passion for people. She attended the Southern Illinois University of Edwardsville with the goal to complete a Business HR Degree. April accomplished this feat and landed her first role by joining the ranks at Husch Blackwell, leading recruiting efforts for lateral hires and interns. April stayed at Husch Blackwell for 11 years – learning new skills and gaining incredible experience. April then joined Keeley Construction to help build out their Human Resources department. April had the opportunity to create their HR department from scratch and bring her vision to life.

After joining Keeley Companies seven years ago, April has grown a non-existent department to a six-member team that handles the HR and recruiting efforts for Keeley Companies, Keeley Construction, Keeley Properties, and Keeley Restoration. While April has accomplished many feats, arguably her greatest accomplishment was starting a health and wellness program to serve all Keeley Companies, team members. KeeleyLife offers numerous benefits including wellness challenges that encourage team members to compete against one another to better themselves, and education opportunities that have furthered team members’ knowledge on mental health, physical activities, nutritional health, and financial education.

April’s dedication and passion for helping people become the best versions of themselves have resulted in April being featured in numerous speaking events for the like of Construction Forum, LEAP TA, St. Louis Focused TEI panels, and Red Shoe Society STL. April was also proud to be named one of St. Louis’ top Human Resources leaders, as she was named an HR Awards Winner in 2020. Outside of her passion for developing people and creating a work-environment team members can enjoy, April is a proud member of TALK STL’s board as well as sits on the Southsides board. April is also a wife and mother of two daughters and the proud stepmom of a Marine.