HomeBig Mac Land
A- A A+

A Home Run for the House

On September 17, Paul stopped by the Ronald McDonald House on West Pine to present our organization with a check for $11,000. He also donated $11,000 to Cardinals Care, contributing $22,000 in total in honor of it being his 22nd homer of the season. In return, Paul got to take home the M.
“It’s a privilege and an honor to be able to contribute to the city I play for,” says Paul, who also took a tour of the Ronald McDonald House during his visit and even spent some time with our guest families.

We couldn’t be more grateful to Paul for his generosity, and we are honored to be part of such a special moment in his career!

Check back for more information about how you can win one of the letters from the famous Big Mac Land sign at Busch Stadium! Proceeds will benefit Ronald McDonald House Charities of St. Louis. Want to know more about what happened to the sign? Watch how DeJong’s Home Run Knocks out “M” in Big Mac Land sign during the game against the Brewers! 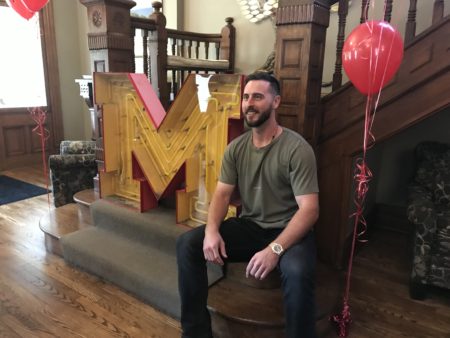